App Store Ecosystem Responsible for Estimated $643 Billion in Billings and Sales in 2020, According to Apple-Commissioned Study

The App Store ecosystem facilitated an estimated $643 billion in billings and sales in 2020, an increase of 24 percent year-over-year, according to an Apple-commissioned study done by Analysis Group economists. [PDF]

The study, “A Global Perspective on the Apple ‌App Store‌ Ecosystem,” comes as Apple awaits a decision in its ongoing trial with Epic Games, much of which focused on App Store policies and fees. ‌Epic Games‌ and other developers have been unhappy with Apple’s 30 percent cut, with ‌Epic Games‌ lobbying for alternative app store options while Apple fights to prove the value of the ‌App Store‌ as it exists now.

Analysis Group’s research looked at how the ‌App Store‌ ecosystem shifted amid the pandemic in 2020, highlighting the ways Apple’s platform helped small developers (those with less than one million downloads and less than $1 million in earnings), as well as exploring how the ‌App Store‌ has benefitted developers over the course of the last five years. 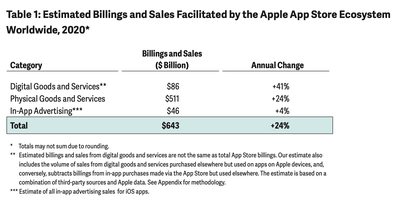 The $643 billion total estimate for 2020 takes into account various app monetization strategies, and 90 percent of the $643 billion comes from sales outside of the ‌App Store‌, which Apple says it collected no commission on. These sales include general retail, travel, food delivery and pickup, ride hailing, and grocery store orders, with physical goods and services representing the biggest category. Basically, when you shop in an app, purchase food delivery, or order a Lyft ride on your iPhone, the study counts that as commerce facilitated by the ‌App Store‌. 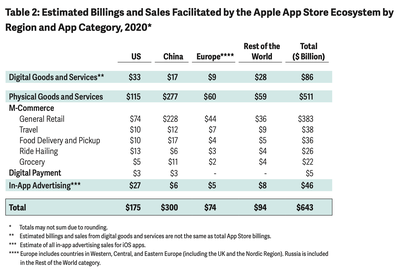 Analysis Group suggests that sales enabled by the ‌App Store‌ increased by $124 billion compared to 2019, marking 24 percent growth. Much of this growth came as people shifted to staying inside and doing more business online because of the pandemic. Billings and sales of digital goods and services was up 40 percent, for example, while sales in the travel and ride hailing sectors were down more than 30 percent.

As for larger developers, a conservative estimate suggests that more than 75 app-based companies in the U.S. and Europe have gone public or been acquired, with a total valuation of more than $510 billion at the time of their offering or sale. Apple says that these are all companies for whom iOS apps are central to their businesses. Dating app Bumble, for example, started out on the ‌iPhone‌ in 2014 and IPO’d in 2021, raising $2.2 billion.

In the announcement highlighting the study, Apple also pointed out that it helps developers create apps with more than 250,000 APIs in 40 software development kits (SDKs), as well as helping budding developers with Developer Academies and other app development courses and educational offerings. Apple says more than 10,000 people have graduated from a Developer Academy and have launched more than 1,500 apps, and its educational efforts reached more than two million students and teachers in 2020.

Developers on the ‌App Store‌ prove every day that there is no more innovative, resilient or dynamic marketplace on earth than the app economy. The apps we’ve relied on through the pandemic have been life-changing in so many ways — from groceries delivered to our homes, to teaching tools for parents and educators, to an imaginative and ever-expanding universe of games and entertainment. The result isn’t just incredible apps for users: it’s jobs, it’s opportunity, and it’s untold innovation that will power global economies for many years to come.

Apple’s full Newsroom article has additional detail on the study as well as anecdotes from developers on how various ‌App Store‌ features and functions have helped them grow their businesses, and the full study is also available in PDF format.

Apple previously worked with Analysis Group on a study that demonstrated how similar Apple’s ‌App Store‌ fees and practices are to those of other digital marketplaces like the Amazon Appstore and the Google Play app. That study, published in July 2020, came ahead of when Apple CEO ‌Tim Cook‌ testified in an ‌App Store‌ antitrust hearing.