How to watch Apples WWDC 2021 keynote

Apple streams its major keynote presentation to most of its own devices, plus YouTube. Here’s how to find the best way to watch for you.

There is a lot more to the conference than this opening keynote. And because it’s all online, there is more chance to see video of the many developer sessions.

But developers and users alike will be watching for Tim Cook to step out and say, “Good morning.” Here’s how to watch him say it — and learn what Apple is launching and updating this year.

This may be the best all-round way to watch the keynote since if you have any device that can play YouTube, you’ve got the keynote. Plus Apple has already set YouTube Premiere ready, meaning you can go to the page and set a reminder now.

You may find, though, that the YouTube video lags a few seconds or even much of a minute behind the event. It’s impossible to quantify it as the lag, if you get one at all, is dependent on your internet speed and also where you are in the world.

If you’re in any kind of group chat, it can be a bit irritating to see a live comment like “At last!” and not have a clue what it’s about for a minute or so. But if you’re fine with that, YouTube is good.

You might prefer to watch, though, directly on either Apple’s website or its devices. The site has already been updated in readiness for WWDC 2021, or at least it has in the US.

After the event, you can see a contents timeline and skip to watch the sections you want

If you’ve got aniPhone or iPad handy then you could still go to the Apple website and watch the stream over Safari. But you could also launch the Apple TV app.

To Apple’s credit, they don’t tend to push their events down your throat on this app. To everyone else’s chagrin, though, they do make it harder to find the event video when you want it.

It’s possible that Apple will promote the event more obviously when it’s actually on. But in the meantime, you can’t find it, not even with a specific search.

So while Apple TV 4K is perhaps the best viewing experience, it and the Apple TV app oniOS are the worst for finding the thing to view. Again, at least they are until afterwards.

If you don’t follow the live stream as it happens, or if you just want to watch again, then Apple makes the keynote widely available. It remains, for instance, on YouTube and on the Apple TV app — where a deliberate search will now find it.

The YouTube version also adds a contents list in the video description, after the live stream has ended. So you can quickly skip to the section on, say iOS, with a single click.

Also on YouTube, as you watch, you can use the regular video editing keys of J, K, and L to move it along. K is play or pause, while J and L leap back or forward 10 seconds, respectively.

The video on Apple’s own site doesn’t recognize those keystrokes. However, it does present a timeline which divides the presentation into chapters that you can jump to.

Video replay is also another advantage of the new online-only format. The replay of keynote videos can be on Apple’s site more quickly than from a live presentation, since it’s all pre-filmed and pre-prepared. 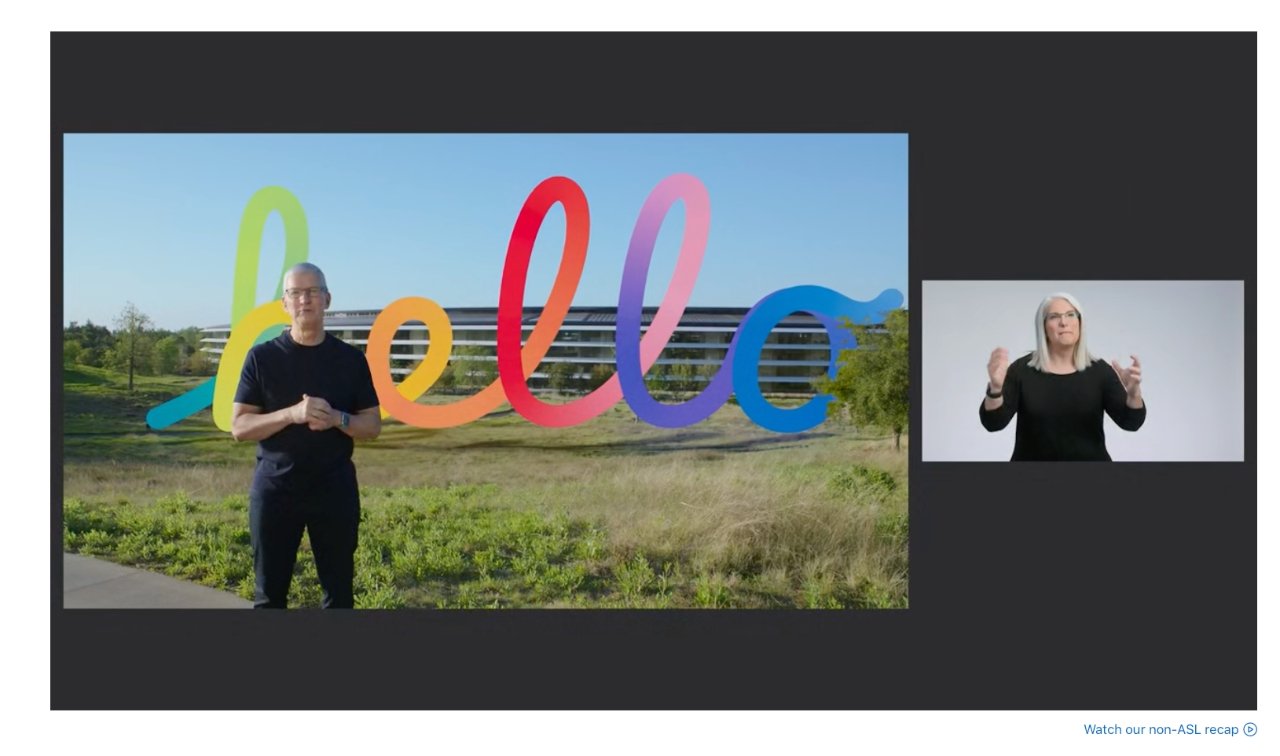 At some point after the event, Apple releases an ASL version of the video

Curiously, though, Apple may not require you to visit the US site to see the video. While the live stream is now most often solely on the US version of the site, replay videos are available later on different international versions of Apple.com.

The US version may still be the best, though, as it’s the only one that optionally provides American Sign Language interpretation. Go to the Apple events page, choose WWDC 2021 when it’s available, and there is a link at bottom right to play the ASL version.

All of the above — YouTube, Apple’s website, Apple devices — are what you need if the only thing you’re interested in is the keynote. If you’re even a little interested in development, though, there is another way to watch.

Apple’s newly updated Developer App is a way that gets you the annual State of the Union presentation, as well as developer topic-specific sessions.

They keynote is the main attraction, but across the whole of the week there are going to be significant updates revealed. As well as watching Tim Cook introduction to the week, then, be certain to read AppleInsider for the details — and what those details really mean for you.