Following the success and popularity of the Apple TV+ original series Ted Lasso, official merchandise related to the series will go on sale next month, according to an interview with showrunner Bill Lawrence. 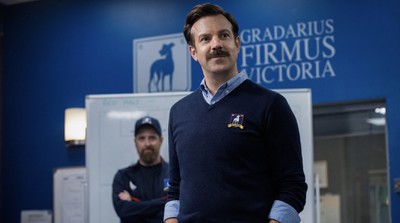 As reported by 9to5mac, Bill Lawrence, in an interview on the “Fake Doctors, Real Friends” podcast, says that official Ted Lasso merchandise will go on sale later this month, but notes that official kits for the show, such as Richmond jerseys, won’t come out until September.

On the podcast ‘Fake Doctors, Real Friends’ Ted Lasso show-runner Bill Lawrence said that an official trailer for season two of the show is coming in about three weeks.

He also said that the first merch items (‘initial stuff’) will go on sale at the same time later this month. However, if you have been holding out to get your hand on a Richmond jersey, you’ll have to wait a bit longer. Lawrence said Premier League official name kits will come out in September, which will be in the middle of the season two run.

Ted Lasso has grown in popularity, winning and being nominated for multiple awards. The show has quickly become one of the most popular on ‌Apple TV+‌. The second season of the show, which Apple CEO Tim Cook previewed during the company’s April event, will premiere on July 23. You can watch the official trailer for the upcoming season on YouTube.